Dr. John McDougall says that early man was not a hunter-gather. Rather, he was a gather-hunter. Man was primarily a vegetarian who, as his tools improved, got “lucky” from time to time and could eat animals for very brief moments, before the animal rotted and would produce illness if eaten. What that means is that humans were primarily vegetarians until recent times. Today, we think that we have to eat like kings and queens and as a result we have the diseases of royalty: heart disease, diabetes, cancer and arthritis to name a few. At Slender For Life™ we know the value of plant-based eating so we teach clients self-hypnosis that they can end their desire for the fats of beef, pork, poultry and fish and create healthy desires for real food. You too can learn hypnosis and change your eating habits.

Early Man NOT a Hunter-Gatherer

The facts show that the importance of hunting has been vastly overrated — and vastly overstated — for one reason: men did it. And we all know that whatever men do is considered the most important thing to be regarded (in patriarchal societies). What women and children do is a distant second.

With the advent of agriculture somewhere between 12,000 to 50,000 years ago, large numbers of people were able to feed themselves plant foods based on the labor of a small number of people (farmers).

Over time, some of the more powerful and wealthy were then able to afford to take those cultivated plant foods and start feeding them to animals, and in turn eat the animals. Those who did this, for example were the pharaohs of Egypt (who we now know suffered from rampant heart disease), and then kings and queens and royalty, who could eat a rich animal-based diet (and who were also among the least healthy people of their time, compared to those who could not afford a rich animal-based diet).

Today in the 21st century, everyone can eat like pharaohs, kings and queens — and we get the same awful diseases which used to be limited to the rich and powerful of the past.

Early Man NOT a Hunter-Gatherer

With self-hypnosis you can change your eating habits and create a healthy lifestyle. If you are concerned about the diseases of kings and queens, you can learn hypnosis with Slender For Life™. Be a gatherer to lose weight and improve your health.

I gather plant-based food for my meals. 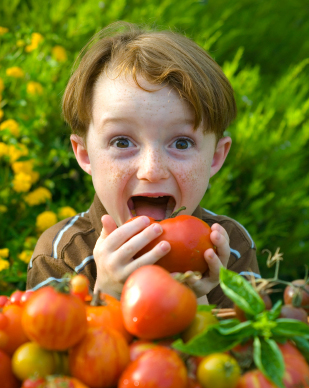