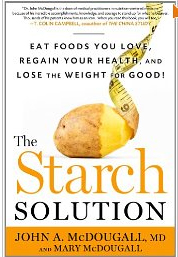 I am so excited about Dr. McDougall’s new book! I downloaded it onto my iPad as soon as the book was released. The Starch Solution is the perfect companion to my book, Becoming Slender For Life.

From Atkins to Dukan, the fear-mongering about carbs over the past few decades has reached a fever pitch; the mere mention of a starch-heavy food is enough to trigger a cavalcade of shame and longing.

In The Starch Solution, bestselling diet doctor and board-certified internist John A. McDougall, MD, and his kitchen-savvy wife, Mary, turn the notion that starch is bad for you on its head. The Starch Solution is based on a simple swap: fueling your body primarily with carbohydrates rather than proteins and fats. This will help you lose weight and prevent a variety of ills.

Fad diets come and go, but Dr. McDougall has been a proponent of the plant-based diet for decades, and his medical credibility is unassailable. He is one of the mainstay experts cited in the bestselling and now seminal China Study—called the “Grand Prix of epidemiology” by the New York Times. But what The China Study lacks is a plan.

Dr. McDougall grounds The Starch Solution in rigorous scientific fact and research, giving readers easy tools to implement these changes into their lifestyle with a 7-Day Quick Start Plan and 100 delicious recipes. This book includes testimonials from among the hundreds Dr. McDougall has received, including people who have lost more than 125 pounds in mere months as well as patients who have conquered lifethreatening illnesses such as diabetes and cardiac ailments.

The Starch Solution: Eat the Foods You Love, Regain Your Health, and Lose the Weight for Good!