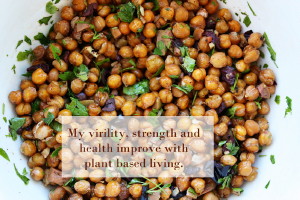 Linda Carney, M.D., recently wrote a stimulating post, “Is Vegan the New Viagra?” Since 1997, men (and their partners) have been telling me that thanks to hypnosis, it was easy for them to give up the meant and dairy products that were making them sick and fat. As a result, they had a healthy desire for plant based foods, their sexual performance improved, they lost weight and their strength, endurance and athletic performance were enhanced. Are you ready to learn self hypnosis and improve your sexual performance?

In this post Dr. Carney writes. “Many men think eating plants is “wimpy” because real men hunt, kill and eat meat for it’s “superior” (muscle building) protein. On the contrary, a plant-based diet boosts verility/fertility, enhances athletic performance, and supports optimal health and a youthful physique. In fact, the results of a study published in the British Journal of Cancer revealed that – on average, vegan men had 13-16% higher testosterone levels than men who consumed meat regularly.”

Is Vegan the New Viagra?

Basically, men who consume meat have lower testosterone levels than their vegan counterparts, take more medications for diet-related conditions, suffer from diminished sexual performance, potency, and erectile dysfunction, are subject to smaller or deformed genitalia in utero, inclined to halitosis/body odor, have enlarged prostates which makes urinating difficult, and tend to be overweight/obese – which elevates estrogen levels. As Dr. McDougall says, “Now isn’t eating meat a manly thing to do!”

Although other factors such as alcohol consumption, a sedentary lifestyle and smoking play a role in developing ED, diet is the most critical factor. Dustin Rudolph Pharm.D. explains how a whole-food, plant-based diet supports healthy arteries in his article Understanding The Ups And Downs Of Erectile Dysfunction. “The most successful way to restore a healthy endothelial system resides in adopting a plant-based diet. Studies have shown that individuals who eat more plant-based foods (vegetables, fruits, whole grains, legumes, nuts) have a much lower incidence of ED and metabolic syndrome unlike those who consume a standard diet. In contrast, high-fat diets showed just the opposite and were associated with a greater incidence of ED due to impaired endothelial function.”

Is Vegan the New Viagra?

Guys, I don’t know about you, but I’d much rather use self hypnosis to make sure that I am eating foods that support my health, wellness and virility than have to depend on some little blue pill in the bedroom. There is nothing masculine or macho about disease, low testosterone or being wimpy when there is an opportunity to rise to the occasion!

I did have a good chuckle this past week at the gym. As we were pumping iron, someone asked if I didn’t need to eat meat to build more muscle. This guy is younger than mean, he does have more muscle mass than I do – I have less body fat than he does. He also has a gut that hangs over his waist band and is frequently talking about being sick and going to the doctor. I asked if he knew anyone else besides me who did not eat meat or dairy. He couldn’t think of anyone – in fact, he said most prided themselves on their volume of meat. As I moved on to another area of the gym, I asked two questions: “How come they aren’t built like a body builder?” and, “How come at least 65% of them are overweight?” Later, on the ferry, he came over to me and asked if he could call me and schedule a consultation – he wants to learn more about plant based living.

You too can learn self hypnosis and start living a healthy plant based life!

My virility, strength and health improve with plant based living.